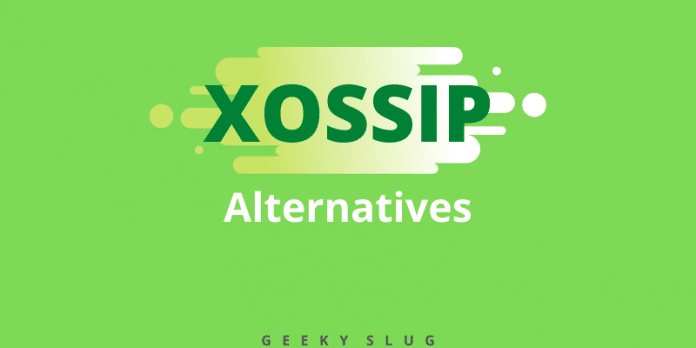 Xossip, in no doubt, was one of the best and prominent forums that used to serve thousands of users every day.

A large number of images, short videos, GIFs, and other media were shared on the Xossip forum. The majority of the threads were related to trending topics in Bollywood, the Indian Cinema.

Due to the vast amount of attraction it got from its users, Xossip was noticed by the government of India.

It came into existence after the former forum named Exbii was shut down by the government due to some internet policies. Exbii was started back in 2008 and was one of the leading hot forums in India. Due to this reason, Exbii is sometimes called the parent company of Xossip.

Xossip had huge user engagement because of the constant growth in the number of audiences. Thus, the servers failed and the administrator had to shut down the forum due to lack of funds. The government also played a major role in the shutting down of the forum.

The approximate count of daily active users on the Xossip board was around 100,000. It did not have any advertisement or promotion because the administrator prioritized user experience over profit. There are a variety of reasons that forced Xossip’s owner to shut down the platform.

Well, Xossip had a long history and in this article, we will try to cover everything related to the forum. Also, we will answer a few questions such as “Why was Xossip banned” and “How to access Xossip”.

As mentioned above, Xossip was one of the hottest and popular Indian forums or boards that served thousands of users daily. The audience was quite engaging as there were active threads almost every day.

The users shared a variety of media such as images, short clips, regional stories, news, sports, GIFs, and had other discussions as well. The board had around 100,000 daily active users that kept Xossip alive.

Xossip had a user registration feature, that allowed a user to create an account and log in to their account for free. The board also had an Anonymous surfing feature that maintained anonymity if a user did not want to reveal their identity.

Xossip users were highly active as anything trending in India would become a thread in a few seconds.

The users treated Xossip as a community and shared their problems and issues with the other members. Community boards such as “Xossip/Dil ka Rishta” and “Xossip/Zindagi Ek sangharsh” were the most active boards on Xossip.

Why was Xossip banned

As you all know by now, the forum was banned because of the many complications that it faced.

Getting straight to the point, Yes. The Xossip website has been down for a long time now. The site administrator had to shut down the forum because of the hike in server fees caused by the consistent audience growth.

The website had around 100 thousand users that were quite active on the threads. The owner also did not have any advertisement on the website to keep the user experience on top.

If you try to access the official Xossip website from your browser now, you will be directed to an error page.

Because of the enormous craze and high user activity, many alternatives to the official Xossip forum came into existence. These websites may or may not be managed by the forum’s administrator. The alternatives were either created by some former members or any other anonymous person.

Starting with the best of all the alternatives, we introduce you to Xforum.live. Xforum has been termed the best alternative of Xossip and is quite famous on the internet. Many old members are still active on Xforum.

Xforum is a hot Indian forum or a board where users can post images, short clips, GIFs, and start threads related to the trending topics of the time. It is an amazing platform to post questions as the members are helpful and cooperative.

As these websites have a large amount of spam and fake users, we recommend you to use a secondary or an anonymous email ID for the registration process.

Xossipz is another great alternative to the forum. It has a huge amount of active users that engage in a variety of trending threads. The forum is still growing and the member count keeps increasing day by day.

The user interface of Xossipz is very similar to that of Xossip. It gives a nostalgic feeling to all the users.

However, there is no anonymous surf feature like the original Xossip. A user has to register and login to be able to scroll through the threads.

The registration process is comparatively easy as compared to other spammy forum websites on the internet. We will recommend you to use an alternate email address because of the security issues of forums.

Xossipy is another lesser-known alternative to the Xossip board. However, it’s not as good as compared to the other alternatives mentioned above.

The administrator of this forum faced a lack of funding and had to enable registration to reduce the server load. The site owner got around 500 dollars as a donation from multiple active members. The website has a growing number of users that add to its large community.

Registration for Xossipy is easy and free for all. Any user can register with a username and an email address. However, we suggest using an alternate email address because of the security status of such forums.

There are many other Xossip alternatives that are lesser-known because of their small audience. However, we have mentioned some of them in the list below.

Many users try to access the original Xossip forum. But, all they get is disappointment and an error page. This is because the administrator completely removed the website from the internet. In addition to that, the Indian government also banned the domain www.xossip.com.

But, we have a trick that anyone can use to access the Xossip board. It seems complicated at first but it is a piece of cake once you know what you’re doing. All you need to do is follow the below-given steps carefully.

For this trick, we will use a website known as the Wayback Machine. The website is like a time machine but for web pages. Wayback machine crawls the websites on the internet at regular intervals and takes a snapshot whenever an update is found.

Using this method, you can easily access the Xossip forum and check your favorite threads and posts. Some threads may not open while most of them will work just fine.

Q. What is Xossip?

A. Xossip was one of the hottest and popular Indian forums or boards that served thousands of users daily. The users shared a variety of media such as images, short clips, regional stories, and GIFs.

Q. What happened to the Xossip forum?

A. Xossip was banned because of the many complications that it faced. The website administrator ran out of money and was forced to shut down the forum. Also, the Indian government imposed a ban on the website.

Q. What is the best Xossip alternative?

A. The following are the best alternatives to the forum that have a huge audience.

Q. How to read Xossip stories and threads?

A. Xossip threads can be read using the Wayback Machine trick that we’ve mentioned in this post.

Xossip was an amazing forum where users shared images, short videos, GIFs, and discussed trending topics. It had a great community that was helpful and cooperative.

It brought many random individuals closer by providing them with a common platform to share something they had an interest in.

Though, the government of India had to take strict actions because of the type of content that was available on the threads. Not only this, but Xossip administrator also faced a lack of funds that led to the forced shut down of the website.

There are many known Xossip alternatives such as Xforum, Xossipz, and Xossipy. But, none of them are as active as the former one.

This article was about Xossip, why Xossip was shut down, and how to access Xossip. We also shared some alternatives to Xossip that are active currently.

How to Drop Items in Roblox – Desktop and Smartphone

How to do Spoilers on Discord – The Ultimate Guide

How to Drop Items in Roblox – Desktop and Smartphone

How to do Spoilers on Discord – The Ultimate Guide

How to Record Discord with Audacity – Quick and Easy Way

ABOUT US
Geekyslug is a tech-centered blog that delivers content on certain topics that fall under various categories such as Android, Windows, iOS, Mac, Internet, and reviews.
Contact us: Geekyslug@gmail.com
FOLLOW US
© Geekyslug Copyright © 2020· All Logos & Trademark Belongs To Their Respective Owners
MORE STORIES

Is Fortnite Dying? How to Make Fortnite Fun Again

August 12, 2020
We use cookies to ensure that we give you the best experience on our website. If you continue to use this site we will assume that you are happy with it.Ok