How to do Spoilers on Discord: Spoilers are no doubt the perfect way of ruining a thrilling new season of your favorite TV show right? But as obvious, no one wants a show or a movie spoiler waiting to deprive them of the fun and experience. Even messages can act as spoilers. As Discord is a chat platform, users might send spoiler texts to each other knowingly or unknowingly.

To prevent this from happening, Discord has an amazing feature called Discord Spoiler. But not everyone knows how to use them, and they end up searching the internet for How to do spoilers on Discord.

You can quickly mark a message as a spoiler on Discord by wrapping your text with the pipe character (||). Example – ||This is a spoiler||. You can also use the Discord interface option Mark as Spoiler to send a spoiler text.

Also Read
Check out how to host a live stream using the Discord Screen Share in Server feature.

Below is an example of how a text with and without a spoiler tag looks like.

How to do spoilers on Discord

If you are a member of any fan club server on Discord, then the Spoiler feature might come in handy. This will prevent you from sending any message that might act as a spoiler for others.

You can quickly use the spoiler tag and cover the message so that other members do not see it right away.

Note
You can read a spoiler text sent by others by just clicking on the black overlay over the text. Click on it again to hide the text.

You can use Discord spoilers on both your computer and your smartphone. We have divided the section to provide guides on both the devices.

There are two ways of sending spoiler texts on the Discord desktop client or the web platform. Refer to the sections below.

As you might already know, Discord uses a special markup language for text processing called Markdown. You can use the spoiler tag in Markdown to send a spoiler message.

All you need to do is wrap your text with the pipe (||) character ||like this||. When you hit send, the processor will notice that the message is a Spoiler and will render it accordingly.

Discord also provides an easy to use interface to its users. To make Discord Spoilers quick and easy, Discord provides an option to mark a text as a spoiler.

Right-click on the text that you want to mark as a spoiler. A small menu will appear in front of you. Click on the option that says Mark as Spoiler.

Note
Note that this menu will only be available on the Discord Desktop client and not on the web version.

That’s how easy it was to send a Spoiler message on Discord.

Sending spoiler texts on the Android application is a piece of cake. Just like on PC, there are two ways to send a Spoiler text on Discord.

To use the Discord spoiler tag Android, you need to wrap your message with the || character ||Like this||. When you hit send, the message will automatically get converted into a Spoiler text.

Discord also has a clean application interface in the smartphone app. You can easily access the small menu by holding the text message for some time. When the menu appears, simply tap Mark as Spoiler to send the message as a Spoiler.

Also Read
Check out the Ultimate Guide to delete Discord Servers in a flash.

In addition to text messages, Discord also provides image spoilers. If there is an image that might be a spoiler for some members, you can send it as a spoiler image.

While sending an image on Discord, you get a prompt that has an option of Mark as Spoiler. Simply check that option and hit send. 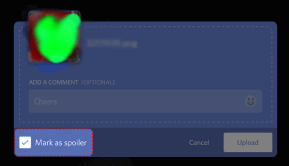 That’s how you send an image spoiler on Discord.

To send a spoiler message on Discord, wrap your text with the pipe (||) character and hit send. Your message will be sent as a Spoiler. This method works on both desktop and smartphone.

How to Unban Someone on Discord – The Complete Guide

How to Add Roles in Discord – The Definitive Guide

How to Unban Someone on Discord – The Complete Guide

How to Add Roles in Discord – The Definitive Guide

How To Redact in Adobe – Redact Text, Images, and Pages

ABOUT US
Geekyslug is a tech-centered blog that delivers content on certain topics that fall under various categories such as Android, Windows, iOS, Mac, Internet, and reviews.
Contact us: Geekyslug@gmail.com
FOLLOW US
© Geekyslug Copyright © 2020· All Logos & Trademark Belongs To Their Respective Owners
MORE STORIES

May 11, 2020
We use cookies to ensure that we give you the best experience on our website. If you continue to use this site we will assume that you are happy with it.Ok